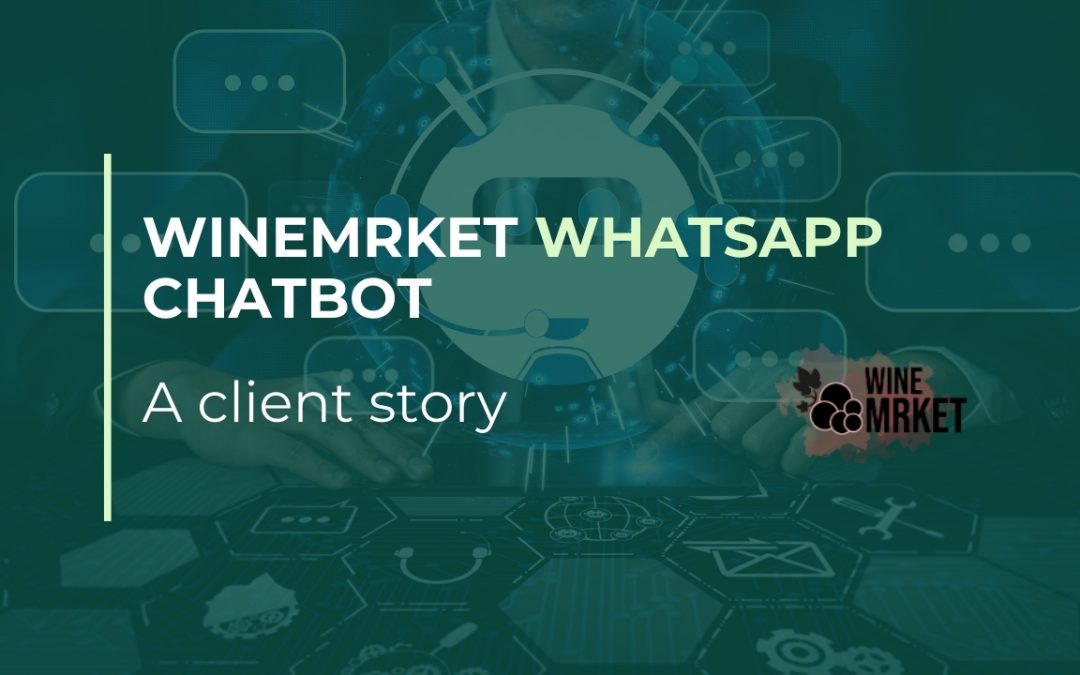 Winemrket is a wine shop that breaks away from the traditional and seeks to offer unique experiences to its customers, which, contrary to what might be expected, are the wineries that trust them to market their products.

With the purpose of turning the purchase of wine into an experience, and landing in the international market, it decides to use a chatbot specialized in solving user’s frequently asked questions, as well as offering recommendations on wine products.

A conversational chatbot integrated into the Winemrket website, WhatsApp and Facebook, in 3 languages, with multimedia content focused on solving the most common inquiries, and that assists its users in the selection of a wine, developed using templates and simple-to-use resources that allowed its implementation in less than 48 hours.

Winemrket is a wine shop that breaks away from the traditional and seeks to offer unique experiences to its customers, which, contrary to what might be expected, are the wineries that trust them to market their products.

With the purpose of turning the purchase of wine into an experience, and landing in the international market, Winemrket developed a business model where instead of being a mere intermediary for its customers, it becomes a partner that helps them to achieve their goals.

After months of development and analysis of the wine market, it became clear that what they needed was a different approach to their competitors, in order to get closer to their end customers, and offer them a more complete and enriching experience.

It was at that moment when the idea of working on the user experience through a chatbot that would allow them to converse with their end customers, instead of simply making an online sale, took shape.

This is when Vicente Sumiller, their chatbot specialized in wine recommendations, was born.

Before we go any further, it is important to know why a chatbot is a great solution to stand out from the competition in ecommerce and, especially, in a project like Winemrket.

Chatbots are nothing new in the world of ecommerce.

Thanks to chatbots, e-commerce companies all over the world are boosting their customers’ user experience, as they can get the help they need at any time, exactly when they need it.

These functionalities are completely in line with Winemrket’s needs. If we add the possibility that it can be in several languages, and can be used on different platforms, the value it can add to the project is crystal clear.

Once the decision was made that a chatbot was the right solution, it was time to find out more information, understand what type of chatbot was suitable, what the development costs might be and, overall, what the next step was to get started.

The first Google searches yielded a wealth of information: chatbots can be classified in many ways and, in addition, have a huge number of functionalities.

Winemrket was overwhelmed, they spent hours and hours learning about these concepts without taking into account key factors such as the complexity of a chatbot or the cost of each of the functionalities.

To summarize and explain it in the simplest way, a chatbot can be:

With or without artificial intelligence

By how they interact with users

Depending on the value they provide to the user

For this, you have to add the languages in which you want to work and the channels where the chatbot would run, among other things.

As we mentioned previously, this would be a very brief summary of the information Winemrket obtained and, based on this, they made the following request:

“I want a chatbot with artificial intelligence, that is hybrid between directed and conversational, with multimedia content and to cover all aspects that offer value to the user. I also need it to be in 3 languages and to be omni-channel.”

Without knowing it, they had ordered the Ferrari of chatbots.

After explaining the costs of such a chatbot and the time it would take to develop it, it became clear that this was not what they were really looking for, and we were able to establish much clearer and more realistic objectives.

After explaining the costs of such a chatbot and the time it would take to develop it, it became clear that this was not what they were really looking for, and we were able to establish much clearer and more realistic objectives.

What they really needed versus what they wanted was:

A conversational chatbot  integrated into the Winemrket website, WhatsApp and Facebook, in 3 languages, with multimedia content focused on solving the most common inquiries, and that assists its users in the selection of a wine.

This project was much simpler, cheaper and, in addition, it could be up and running in a short period of time.

How to start developing the chatbot for Winemrket,  as soon as possible

With a clear idea of what we were looking for, it was time to get down to work.

First, we needed to “map” the conversations we wanted the chatbot to have.

To do so, as an assignment, we recommended Winemrket to make a mind map to develop these conversations.

This mind map would have 2 branches:

The mind map turned out to be an excellent exercise that helped ground Winemrket’s ideas and led to the clear structure that the chatbot should have. 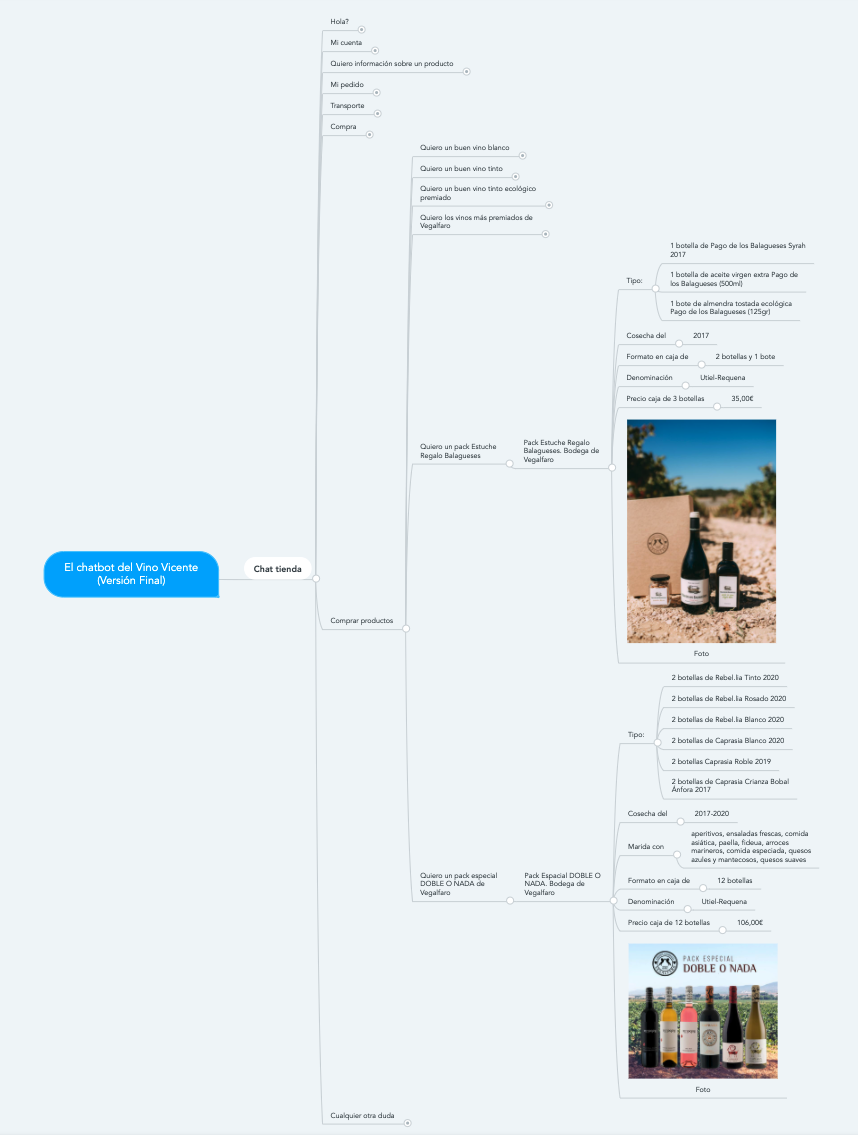 The easiest way to program the chatbot

With our ideas now clear, we moved on to the next step; it was time to configure the chatbot and the conversations we were going to develop so that we could activate it quickly.

So, we created a simple spreadsheet template that allowed the client to transfer the information in the required format without the need for code.

The first step with the template was to develop the chatbot in one language, without multimedia and without worrying about the keywords that would trigger the responses. 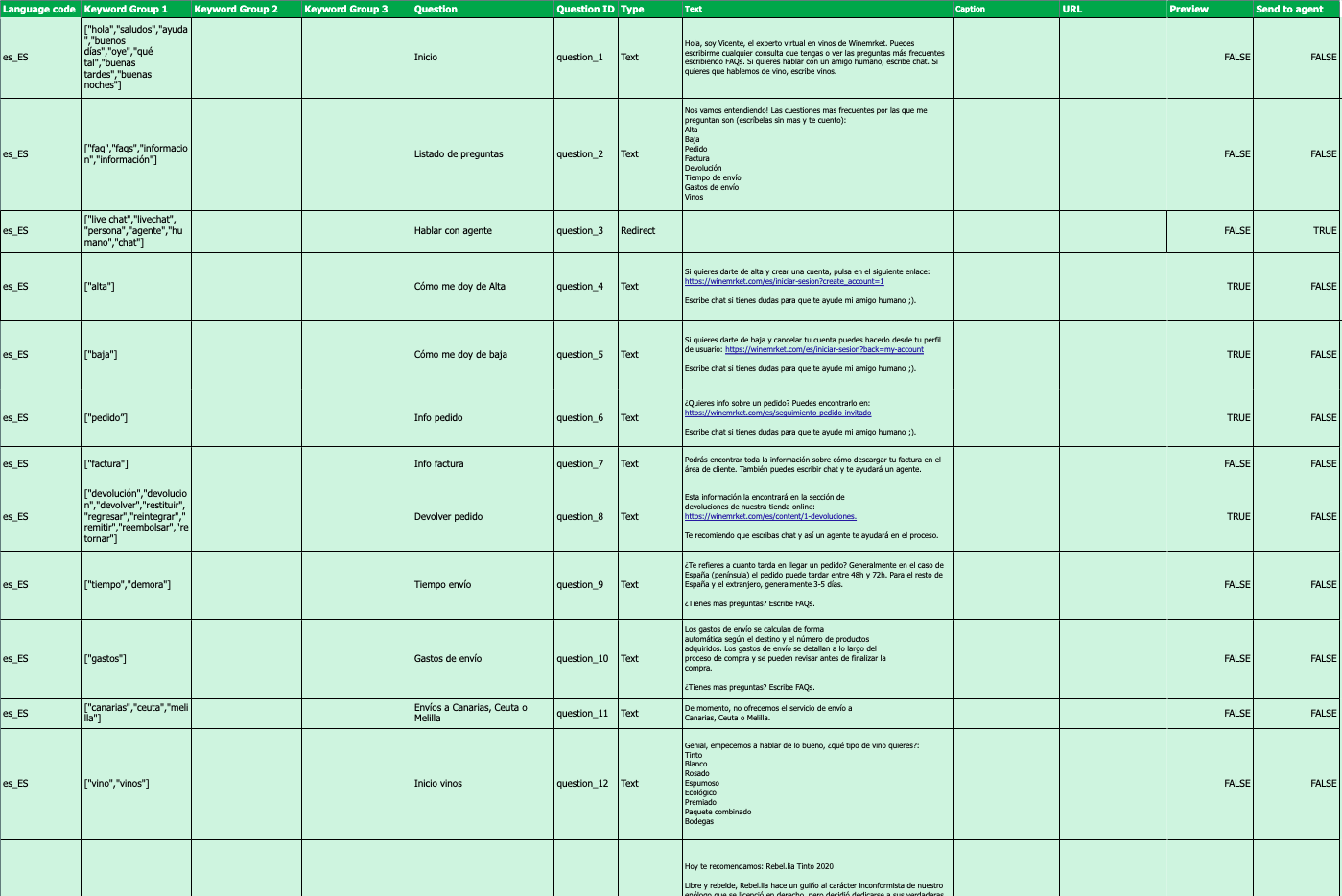 Once this draft was done, we went on to structure the multimedia content and the rest of the information.

After having structured all the information, we moved on to work on the keywords that would trigger each of the chatbot’s responses.

For this task, we started with the roots of the generic keywords. Once they were well structured, we added variations (accents, etc.), synonyms and other ways of saying the same thing.

The goal was to find the maximum spectrum of keywords related to each query. 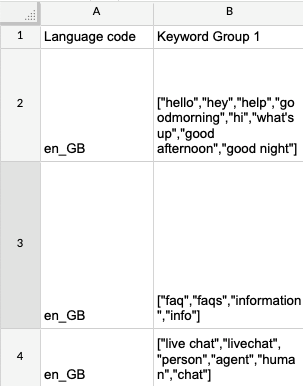 Finally, all that was left was to define the design and send it to the activation team to get the chatbot up and running.

Using their design team, Winemrket defined a chatbot that aligned with the personality and objective they had set, selected a colour palette that matched their brand image, and that was it!

With all the information, the activations team was able to launch Vicente Sumiller in less than 2 hours, both on Facebook, WhatsApp and on their website.

This was the result. 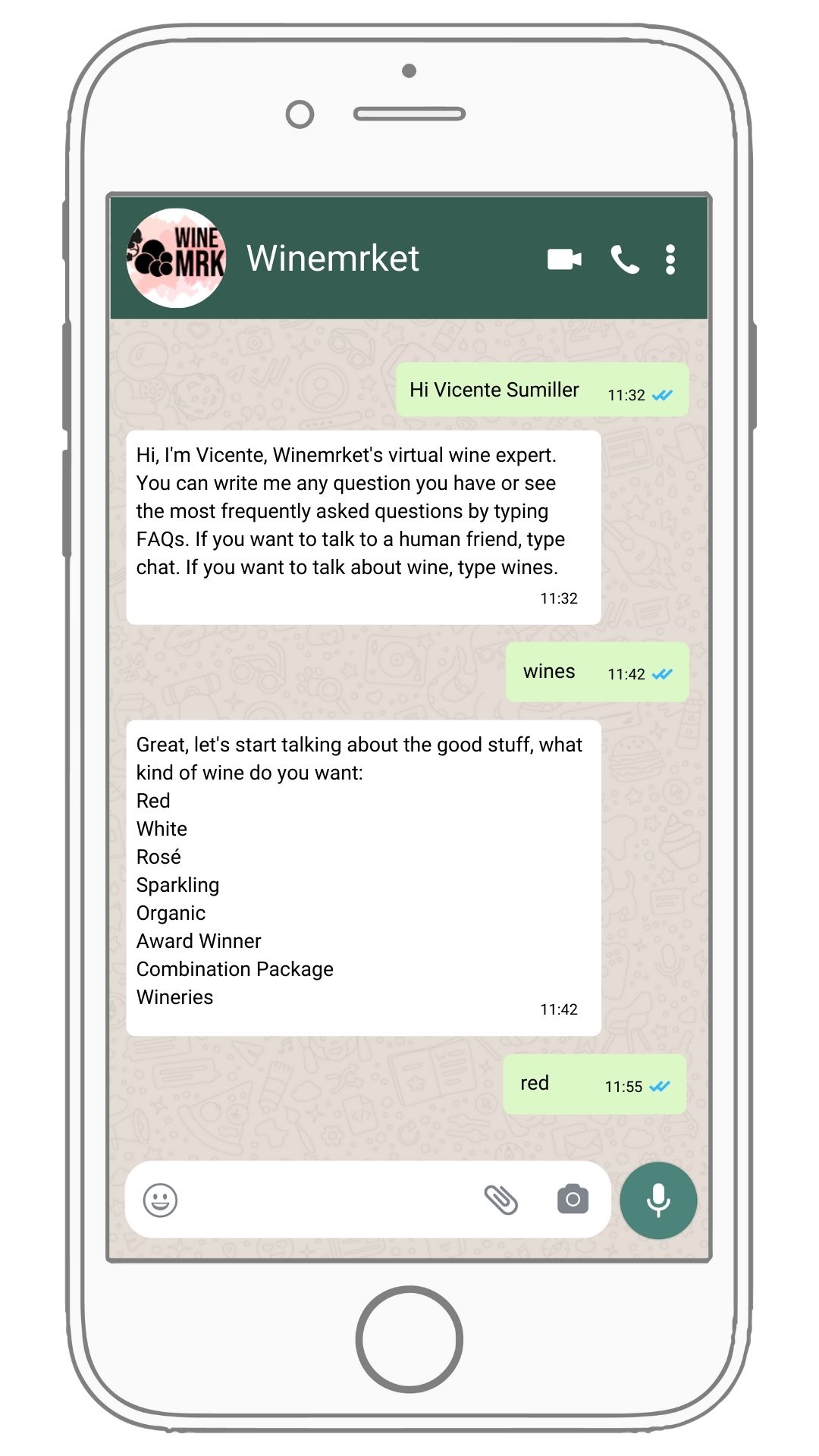 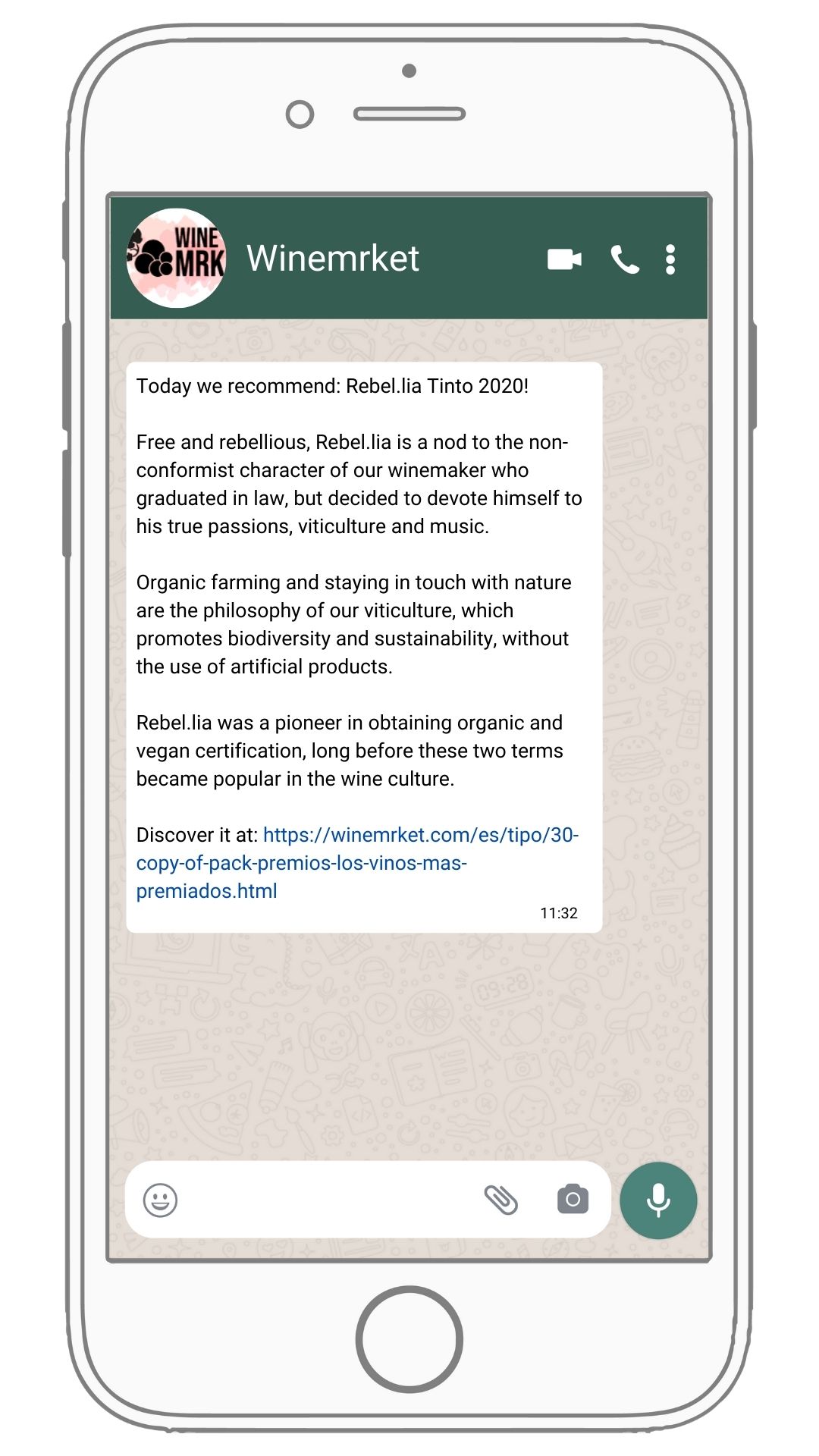 XWOZTELL SANUKER, S.L. uses first party and third party analytical cookies in order to measure, analyze and improve the user experience, and identify problems to improve our website. You can accept all cookies by clicking on the "ACCEPT ALL" button. You can also reject cookies by clicking on the "REJECT" button or configure your preferences using the “PREFERENCE" button. You can find more information in our Cookie Policy PREFERENCEREJECTACCEPT ALL
Cookies Policy